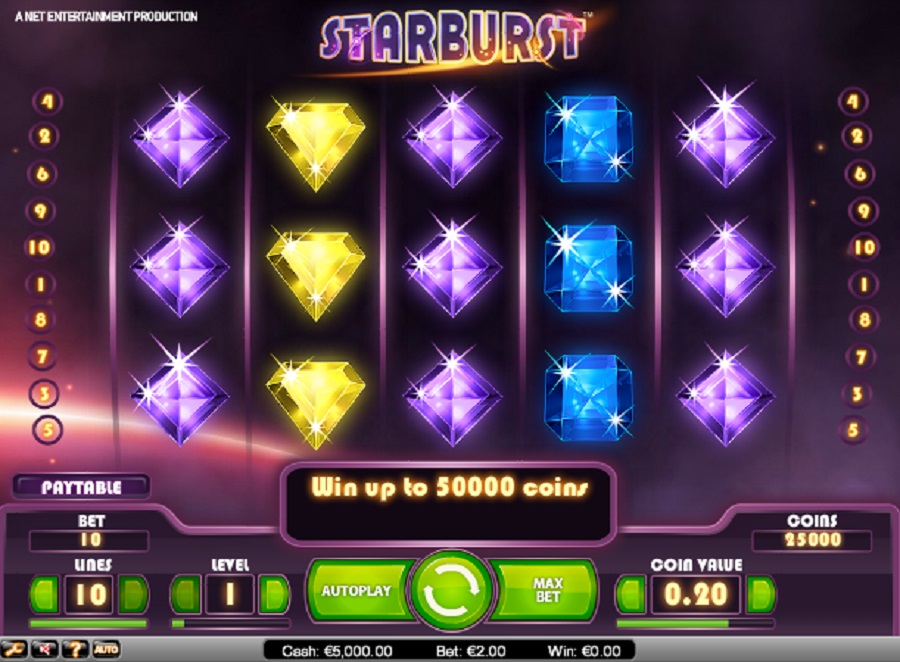 There has been a lot of fuss around the release of Net Entertainments “Starburst” slot, which triggered a lot of interest and anticipation among us punters in need of new excitement. Yet, what we get is not a typical NetEnt slot – simple graphics (too simple, one may say), Jean-Michel Jarre - like sounds-(which perfectly complement the theme), and an attempt at innovative features as a kicker, but not too successful one. “Less is more” is a slogan that may be valid for some industries, but the development of online slots is not one of them.

Yet, it takes looking at the slot as a whole to get the right impression, and in that respect, “Starburst” is by no means a bad game – on the contrary, it will certainly have its fans, but its only problem is that it is far from what we’re used to from NetEnt.

Judging by the name of the game, “Starburst”, one would expect a lot of cosmic, starry elements – yet, we get a bunch of gems, red sevens and bars decorated with a starry sparkle. The only things that are really in line with the theme are the wonderful cosmic backgrounds and the aforementioned sounds, as well as the only special feature of the game – the expanding wild which awards a re-spin.

On a more positive note, “Starburst” is a two-way-win slot which awards a decent number of prizes, considering that it has only 10 paylines, so you won’t lose too much on it. In addition, it enables all types of players to enjoy it – with coin amounts ranging from $0.01 to $1 and the possibility to place up to 10 coins per each of the 10 lines, you get a betting range from $0.10 to $100, which is enough for all playing tastes.

As mentioned before, “Starburst” boasts very few special features, which may be observed as problematic by many punters. Namely, it features a Starburst Wild, which appears only on reels 2, 3, and 4, and expands to occupy the whole reel. To make things better, the wild does not only replace all other symbols, but it also awards a re-spin each time it appears, keeping the wilds in the same position and awarding even more prizes. The maximum number of re-spins you can win is 5.

Yet, however generous this one feature may be, one seriously feels the lack of something else – anything else, for that matter - that would pose a difference from the base game.

It’s a pity NetEnt’s slot designers did not use a bit more imagination to exploit such a wonderful and attractive theme that allows for a great range of graphical solutions and special features. The way it is now, “Starburst” represents merely an average slot that people would rather play for a change than for adoration of its qualities; still, it’s a game one should give a try and see whether there’s something for you in it.

Before you click on any UK online casino link, please keep in mind that not every time you can win and losing every now and then is simply part of the game. Never play in casino for real money you need for every day life.

If you enjoyed playing Starburst, try to play for real money in the online casinos we recommend. You can find the list on left or right side of the Slotzzz.com website.

All the UK casinos offer a really nice online casino welcome bonus, so pick one up to your preference. Please note, when it comes to bonuses, the amount you are getting is important, but the full terms and conditions are even more important. It makes a difference if you are getting 50% up to 100£ or 100% up to 100£. In the first case to get the promised bonus 100£ you have to deposit 200£ in the second case 100£. Besides the percentage, there is also wagering important and the bonus might not apply to all casino games.

Do you want the best of the internet? Play best slots, best UK roulette or the best British slots and much more for free here on Slotzzz.